When Recycling Lives expanded their Preston recycling operation, they purchased and installed three complete metal separation systems from Master Magnets.  Each system included a two Vibratory Feeders, a Magnetic Drum and an Eddy Current Separator.  The equipment is part of a process to recover ferrous and non-ferrous metals from shredded car bodies.

Recycling Lives is one of the UK’s premier recycling companies, having recently won the Queen’s Award for International Trade following Equawards for Sustainable Development in 2010 and 2014.  They have over forty years’ experience in the recycling and waste management industry and specialise in the recycling of scrap cars, scrap metal, WEEE, plastic, household/commercial waste, bulky waste and plastic materials.

Recycling Lives expanded their operation in Preston to handle the ever-increasing input of recyclable materials.  In early 2013, they were working with Atherton Material Handling Ltd, based in Retford, Nottinghamshire, planning a new plant layout and the process flow, including the conveyors, for shredded car bodies.  One key aspect of the plant was magnetic separation and Atherton proposed that Recycling Lives contact Master Magnets.  Recycling Lives was already in discussion with another UK supplier and a company from Germany, but after several discussions and a complete review of the application with the Master Magnets sales team, including Andy Rea, Sales Engineer, and Phil Tree, Sales Manager, Recycling Lives ordered three Master Magnets metal separation systems.

Each metal separation system has a primary Vibratory Feeder, with out-of-balance motors, feeding the material onto a high strength, permanent, Rare Earth Magnetic Drum to remove the ferrous and weakly magnetic materials.  The remaining non-magnetic fraction then falls down onto a second Vibratory Feeder that evenly spreads the material onto the conveyor of an Eddy Current Separator where the non-ferrous metal is ejected and recovered from non-metallic material. 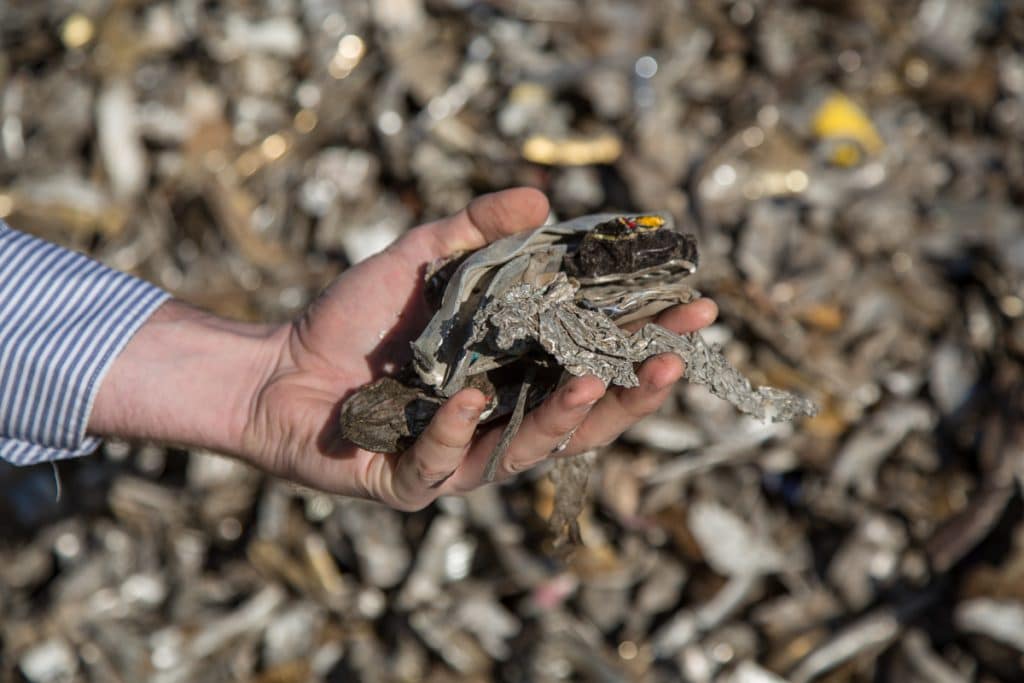 Two of the Metal Separation Systems are installed on the line handling the minus 30mm fraction presently processing approximately 10 tonnes per hour.  Both have Magnetic Drums and Eddy Current Separators that are 1m wide.  The high strength Rare Earth Magnetic Drum (model 14PD) has a diameter of 350mm and uses an alternating pole configuration to produce the cleanest magnetic metal fraction.  The metal is attrcated to the magnetic field and, as it moves along the outside of the rotating shell towards being discharged underneath the Magnetic Drum, it flips between the different magnetic poles allowing entrapped material to be released, reducing contamination of the magnetics.

Both the Eddy Current Separators (ECS100) processing the minus 30mm fraction have eccentric rotors to maximise recovery of fine non-ferrous metal.  Recycling Lives estimate that the material being fed to the metal separation systems has a metal content of around 25%, recovering approximately 96-97%.

An Eddy Current Separator consists of a short belt conveyor that has its drive located at the return end and a high speed magnetic rotor system installed at the discharge end. The magnetic rotor, which is positioned within a separately rotating non-metallic drum, revolves at around 3000 revolutions per minute during operation whilst the outer drum cover rotates at the speed of the Eddy Currents’ belt conveyor. 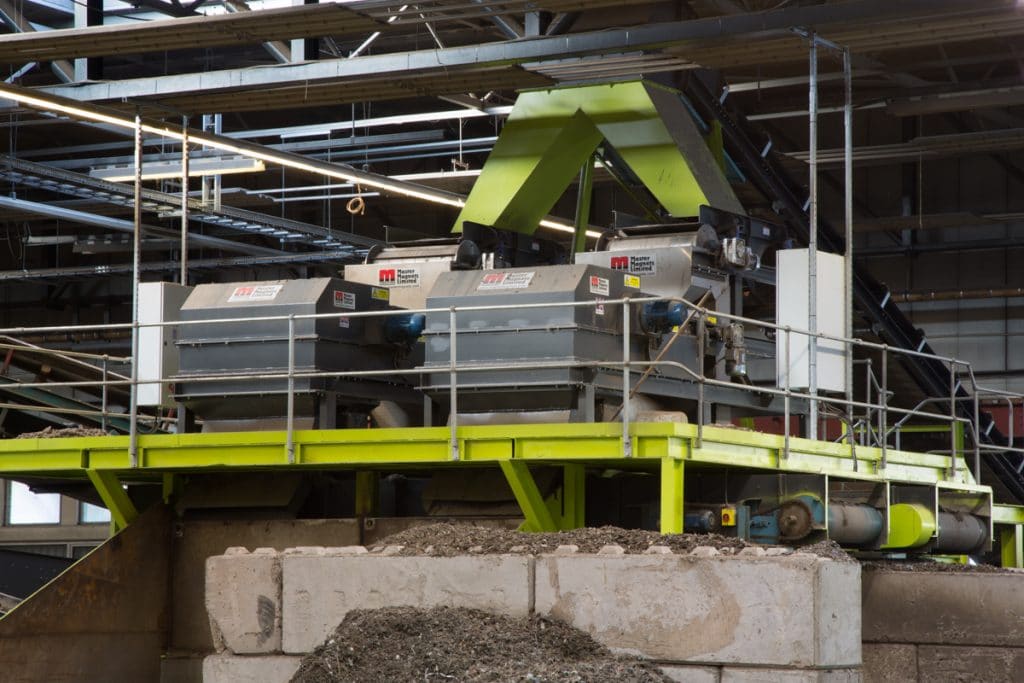 An Eddy Current Separator consists of a short belt conveyor that has its drive located at the return end and a high speed magnetic rotor system installed at the discharge end.  The magnetic rotor, which is positioned within a separately rotating non-metallic drum, revolves at around 3000 revolutions per minute during operation whilst the outer drum cover rotates at the speed of the Eddy Currents’ belt conveyor.  As the rotor spins at these high speeds, an electric current is induced into conducting metals.  The induced electric current produces a magnetic field, which opposes the field created by the rotor, repelling the conducting metals over a pre-positioned splitter plate.  The remaining materials such as plastics, glass and other dry recyclables will simply free fall over the rotor, separating them from the repelled metals.

The third Metal Separation System handles the material fraction 30-90mm and is also handling approximately 10 tonnes per hour of infeed.  With the same Vibratory Feeder, Magnetic Drum, Vibratory Feeder and Eddy Current Separator configuration, the feed widths are all 1.5m.  The Eddy Current Separator (ECS150) has a concentric rotor design for this specific application and recoveries of metals are again at around 97% of the infeed.

Gary Halpin of Recycling Lives explained the reason for choosing Master Magnets.  “We preferred to source the equipment from a UK supplier as we wanted local service support.  When we reviewed all the options, we found that the Master Magnets equipment was every bit as good as the other suppliers.  Their support and response has been great and the equipment is working really well.”

For additional information on using Magnetic Separators and Eddy Current Separators to recover metal from waste, please contact us on: 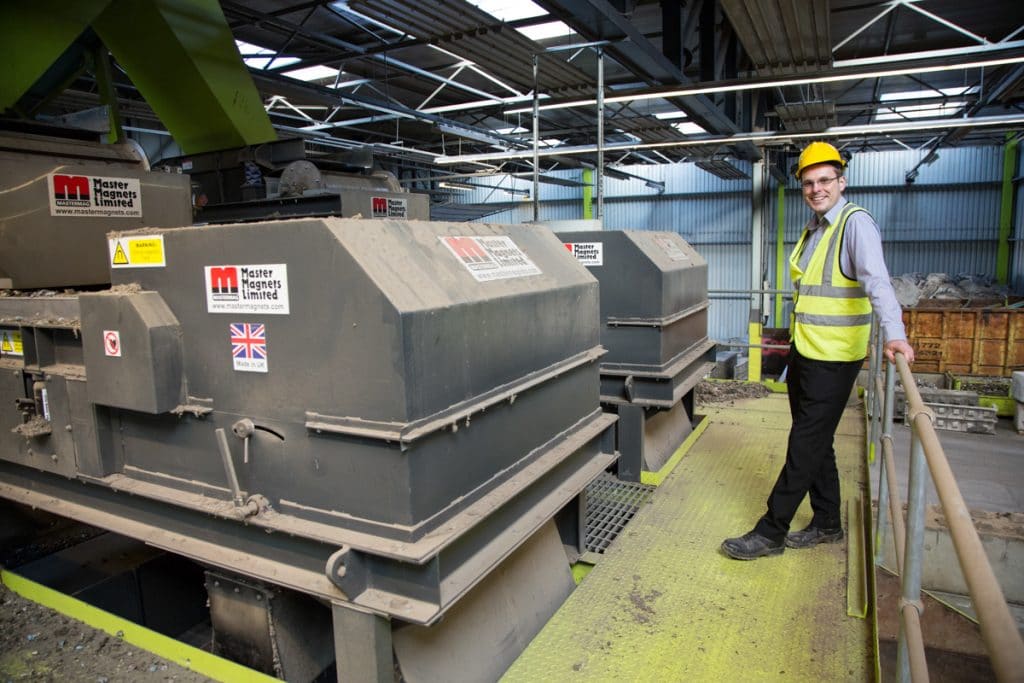