Following an increase in the demand for material testing, Bunting has constructed a new recycling test facility at their manufacturing operation in Redditch.  Initially, the facility will house two models of Stainless-Steel Magnetic Separator and an Eddy Current Separator.

“We are seeing an increase in the number of controlled material tests,” explained Adrian Coleman, Bunting-Redditch’s General Manager.  “The tests confirm the separation performance, enabling the recycling company to calculate the benefits.  As material specifications tighten and separation performance becomes increasingly critical, the number of tests we undertake increase.”

There is a growing demand for material testing, especially on the Stainless-Steel Magnetic Separators.  Many of the visitors to the Bunting and Master Magnets ‘Metal Separation Test Centre’ stands at the IFAT and RWM exhibitions expressed interest in the operating equipment on the stand.  Following further discussions, companies requested to undertaken controlled tests to confirm the level of metal recovery.  Subsequently, in January 2019, Bunting received three separate orders for Stainless Steel Magnetic Separators.  Two were following tests conducted at the Redditch facility. 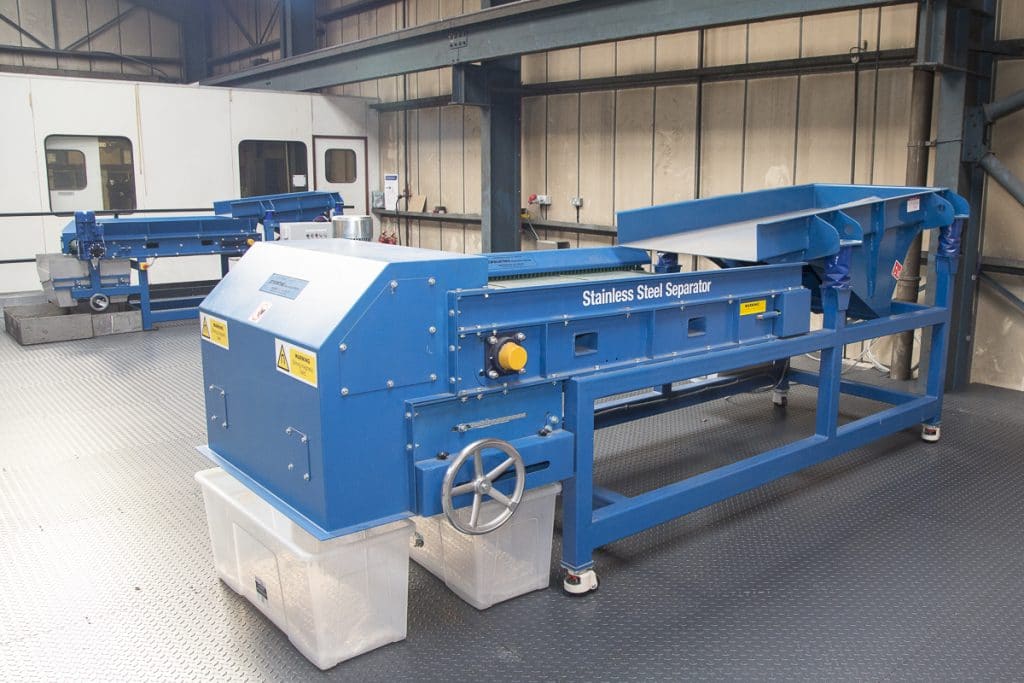 The new Recycling Test Facility covers an area of 122 square meters and was constructed in less than three months.

The new Recycling Test Facility expands Bunting’s testing capabilities.  One of the most extensive laboratories for high intensity magnetic separators for the mineral processing and ceramics industries in the world is already located at the Redditch plant.

“Already, the new recycling test facility is in operation on a daily basis,” said Adrian.  “Our aim is undertake tests for more companies.  We can demonstrate what separation is possible and, hopefully, help in maximising the economic viability of many recycling projects.”

For further information on the Stainless Steel Magnetic Separator or to arrange a test at the Redditch test facility, please contact us via:

All the photographs have been taken by Paul Fears Photography

We use cookies on our website to give you the most relevant experience by remembering your preferences and repeat visits. By clicking “Accept All”, you consent to the use of ALL the cookies. However, you may visit "Cookie Settings" to provide a controlled consent.
Cookie SettingsAccept All
Manage consent

This website uses cookies to improve your experience while you navigate through the website. Out of these, the cookies that are categorized as necessary are stored on your browser as they are essential for the working of basic functionalities of the website. We also use third-party cookies that help us analyze and understand how you use this website. These cookies will be stored in your browser only with your consent. You also have the option to opt-out of these cookies. But opting out of some of these cookies may affect your browsing experience.
Necessary Always Enabled
Necessary cookies are absolutely essential for the website to function properly. These cookies ensure basic functionalities and security features of the website, anonymously.
Functional
Functional cookies help to perform certain functionalities like sharing the content of the website on social media platforms, collect feedbacks, and other third-party features.
Performance
Performance cookies are used to understand and analyze the key performance indexes of the website which helps in delivering a better user experience for the visitors.
Analytics
Analytical cookies are used to understand how visitors interact with the website. These cookies help provide information on metrics the number of visitors, bounce rate, traffic source, etc.
Advertisement
Advertisement cookies are used to provide visitors with relevant ads and marketing campaigns. These cookies track visitors across websites and collect information to provide customized ads.
Others
Other uncategorized cookies are those that are being analyzed and have not been classified into a category as yet.
SAVE & ACCEPT